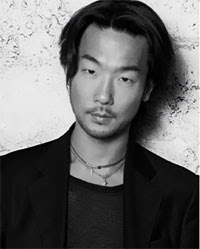 Born an orphan in Seoul, Korea, Raphael Young was adopted at age 4 by a French family. He spent his summers watching his uncle, creator of Yves Saint Laurent shoe studio, at work in the factory. He was allowed to make his first pair of shoes at age 14, and was taught the traditional methods of craftsmanship. This artisan apprenticeship has resulted in a man who knows about shoes.
Today, Raphael makes each prototype from stitch to finish with rigorous attention to detail. As a true cobbler and shoe maker, he makes elegant, futuristic footwear that is not only aesthetically pleasing, but well proportioned and balanced – making the shoes stunning and comfortable. Now that is music to my shoe-loving ears. The designer revealed that he’ll soon unveil a patented technology that makes 110-mm shoes feel like your Nikes – his shoes are made for walking!
His key source of inspiration is the women who wear his shoes everyday and his shoes are designed to be a centrepiece, not a necessity.
He launched his line in 2007, and has now opened his flagship store in Paris, the city of his inspiration. He has a growing fan base of shoe aficionados, including Rihanna, Lady Gaga and Sarah Jessica Parker.
I am certain that these beauties would be VERY happy in my shoe closet…

images from fashionising.com and style.com